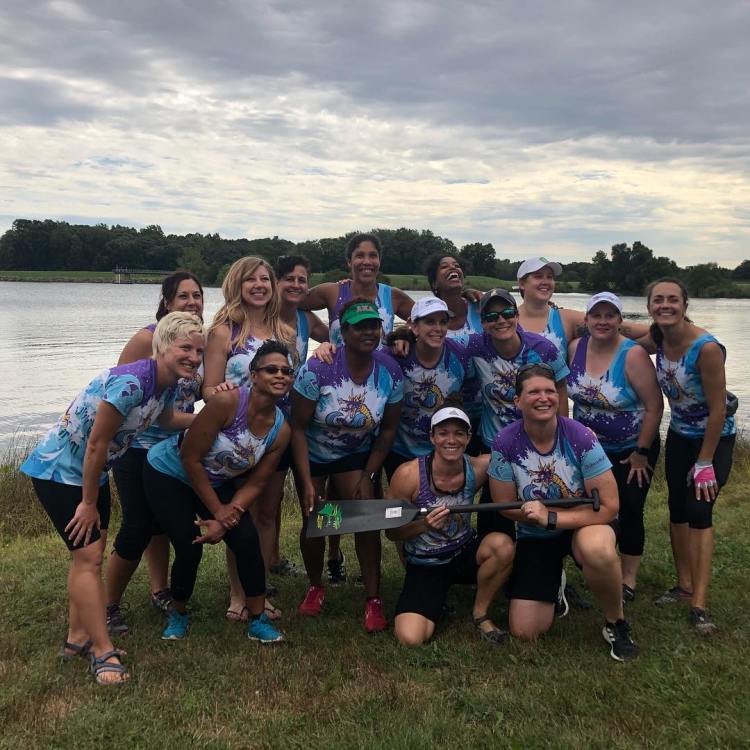 With my awesome rookie teammates and coaches (kneeling, left to right) Megan and Joann

Yesterday, I sat on the water in a dragon boat with 21 other women, just as I have been doing for the last several months. This time, however, we weren’t working on strengthening our technique and building our stamina as we paddled the Schuylkill River during weekly practices.

We were waiting for our first race — the first of three rounds of heats we would compete in — to begin at the Bucks County Dragon Boat Festival. And for just a moment at the starting line, as I felt the quiet determination of my teammates, their coiled thunder grazing the silence before the horn blast that would set us off, I was struck by a sense of the surreal.

Here I was, at 43, in my very first sporting competition. Me, the avowed non-athlete. The woman who’d never played a single sport. Who’d never felt even the faintest yearning to do so while cloaked in her preference for the arts. The closest I’d ever come to playing sports was when I tried out for lacrosse in seventh grade, coaxed by friends going out for the team. All I remember of that experience is struggle and how dejected I felt being the last girl on the field in tryouts for every closing drill to catch the ball. The coach, a kind and patient English teacher, insisted he wanted me on the team, but I packed up my misery and feelings of inadequacy and decided I’d be better off pursuing less daunting activities. 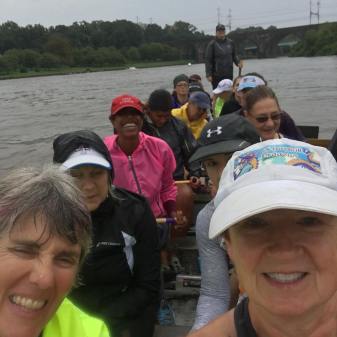 Perhaps it was in that moment I also decided I would never be an athlete. Or maybe it was when I got jeered one too many times by the boys playing volleyball in gym class, fell short of anything resembling grace in gymnastics or lagged woefully behind running the mile during the presidential physical fitness test, lasted mere seconds in the agonizing flexed arm hang. Somewhere along the way I embraced the apparent fact that my role in any type of sport was bound to be awkward and embarrassing.

I was talked into joining the marching band color guard in high school, where we were subjected to rigorous workouts by our director and competitions were a regular part of our season. And, thanks to my mom’s example — she had an ever-growing collection of workout tapes that we did together in our basement — I also developed an enthusiasm for exercise and fitness. But I carried my “non-athlete” status like a trusty but tired joke into adulthood. 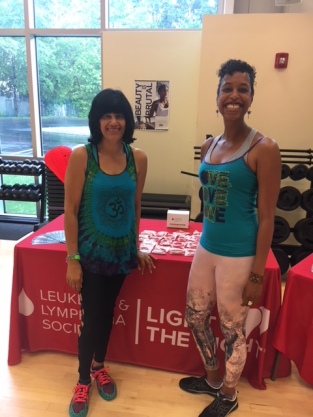 At a Zumbathon with my mom, who inspired my love of fitness

I don’t even enjoy watching sports. And Zumba was, and still is, my favorite form of exercise.

Yet when earlier this year I sat down with a couple who met dragon boating to help them plan their wedding, I surprised myself when curiosity about their involvement in the sport gave way to a spark of interest. When registration for the Schuylkill Dragons rookie program opened, I signed myself up within seconds of receiving the notice.

Something in me wanted the stretch, the challenge. Despite my history, my tales of failure, the doubts that trailed me into my first practice and still, five months later, occasionally rise up to taunt me.

But there I sat yesterday with my fellow rookies and veteran teammates, breathing deeply, putting my trust in everything I’d learned since May, in my body taut with nerves and excitement, in the amazing women and coaches whose energy rippled around me, in the strength and bravery that had gotten me to this point.

By the end of the day, I was holding my very first sports medal. After three 500-meter-long races, my boat came in third in the finals, battling our second Schuylkill Dragons boat to narrowly cinch the bronze. It was among the toughest, most exhilarating two-plus minutes of my life. Somehow, with my muscles fatigued and energy waning, I was still able to power through the 2000-meter race that closed out the day.

I would never have imagined I had it in me. In fact, I was not planning to race yesterday at all because I’d already committed to a girls weekend months ago. When those plans fell through, I lingered in uncertainty about the encroaching race day, dubious I was up to such a feat.

But I wouldn’t have known what I was capable of if I hadn’t tried. Would never have leaned into the electrifying camaraderie of being part of a team reaching toward a goal. Would never have felt that surging pride in belonging to such a fierce and spirited group — and in myself. 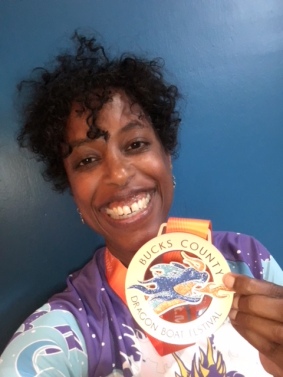 I believe in pushing edges, in stepping beyond the familiar to grow, to learn, to live into spaces that ultimately awaken us to new ways of being, to possibilities beyond what we’ve dared to embrace. But the truth is I am more comfortable taking those risks emotionally and intellectually.

When I chose to join the Schuylkill Dragons, I didn’t overthink my decision. I gave into impulse, knowing only that I talked constantly of wanting to be more in my body and that sometimes challenging ourselves physically opens us up to new spaces in the mind, brings us more alive.

I still have much to learn as a dragon boater. But I have gathered countless gifts from the last few months among these lifelong athletes and women just like myself, who chose to shake off the labels and stories they told themselves and try something different.

Today, my heart is full…and unexpectedly tender. Yesterday, I met a part of me I didn’t know existed. She still feels a little fragile but she’s shining nonetheless. And I’m committed to making her stronger, more capable and more courageous — for my team, yes, and also for the girl who never thought she could. 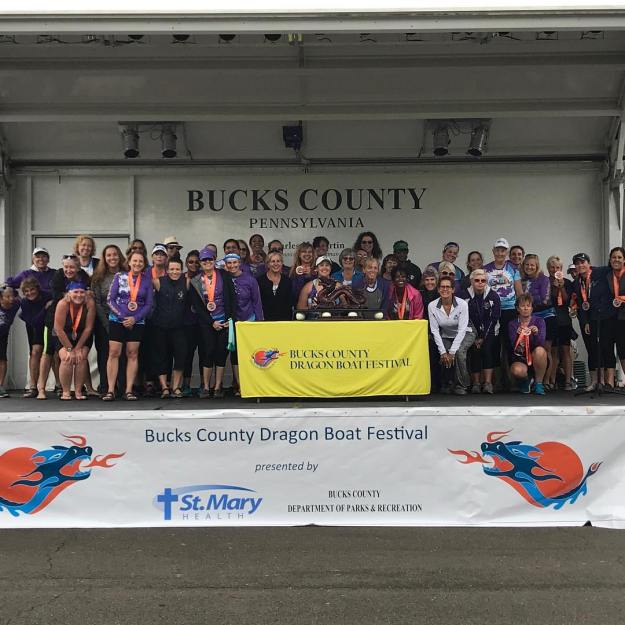 10 thoughts on “Dragon boat win is a meaningful first”